Blurb: Nicky Reed may have won the battle regarding baby shifters working as policemen, but he’s not so sure about the war. His mate and superior officer, Sam Black, is still overprotective with a capital O. As a result, Nicky sometimes finds himself repressing some of Tiny’s—his snow leopard cub other half’s—natural urges. Which leads to frustration on Nicky’s part.

With a new drug called Nemesis killing in record numbers, Alpha Unit One must find out who’s behind this horrible narcotic and get it off the streets—a tall enough order without press accusations that baby shifters are to blame for the team’s lack of success.

Their investigation into Nemesis leads Nicky and Sam and the rest of the team into unexpected waters. Will the stress rip the squad apart? The baby shifters may find themselves unable to perform the job they love: protecting the people of New York City. And Nicky may be in over his head—in more ways than one. END_OF_DOCUMENT_TOKEN_TO_BE_REPLACED

Posted on October 26, 2017 by thebloggergirls 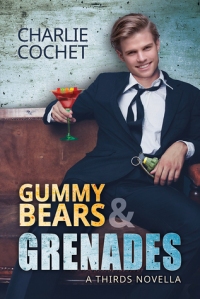 Blurb: THIRDS agent Dexter J. Daley can’t wait to marry his fiancé, Team Leader Sloane Brodie, but first he’s looking forward to celebrating his bachelor party—which he intends to be a shenanigans-free evening of getting his groove on with family and friends.

Of course events don’t work out as planned, but for Dex that’s nothing new. One thing is for sure, dodging drug dealers and hired thugs amid booze, dancing—and even a bear costume—will guarantee it’s a night Dex will never forget. Now he just needs to survive all the fun.

***
Enjoy this bonus story from the THIRDS universe. These events occur between Darkest Hour Before Dawn and Tried & True in the series timeline. While reading this story would enhance your experience of the THIRDS series, it is not necessary to read before Tried & True.
END_OF_DOCUMENT_TOKEN_TO_BE_REPLACED

Posted on December 23, 2016 by thebloggergirls

Blurb:  With time comes healing, but Orlando and the LGBT community are still recovering from last June’s tragedy. To show our ongoing support for those affected by the Orlando shooting, our authors, editors, artists, and staff have volunteered their talents to create this second benefit anthology. All proceeds will be donated to LGBT organizations in central Florida. Join us as we reaffirm that no matter the obstacle, love always wins
END_OF_DOCUMENT_TOKEN_TO_BE_REPLACED

Posted on September 19, 2015 by thebloggergirls

Blurb: As a young man, Dominic Jacobsen already suspects he’s gay, and he gets all the confirmation he needs when a rich boy from out of town climbs into the back seat of Dominic’s GTO. One night with Lamar Franklin is all it takes to convince Dominic he’s found the man of his dreams. Unfortunately, that one night is all he’ll get before Lamar returns to Tucson.

Fifteen years later Lamar returns to Coda, Colorado, after ending the latest in a string of bad relationships. He’s alone, depressed, and plagued by late-night phone calls from an unidentified caller. Lamar’s ready to give up when he comes face-to-face with his past.

Since he was seventeen, Dominic has dreamed of a reunion with Lamar, but that doesn’t mean he’s ready for it now. Facing small-town rumors and big-family drama is bad enough, but Dominic won’t risk losing custody of his teenage daughter, Naomi. The only solution is to make sure he and Lamar remain friends and nothing more. Clothes stay on, no matter what.

It seems simple enough. But for better or worse, Lamar has other ideas.
END_OF_DOCUMENT_TOKEN_TO_BE_REPLACED

Posted on September 15, 2015 by thebloggergirls

Blurb:  Garrett Bowman is shocked that fate has brought him to a family who can sign. He’s spent much of his life on the outside looking in, even within his biological family, and to be accepted and employed is more than he could have hoped for. With Connor, who’s included him in his family, Garrett has found a true friend, but with the distant Brit Wilson Haskins, Garrett may have found something more. In no time, Garrett gets under Wilson’s skin and finds his way into Wilson’s heart, and over shared turbulent family histories, Wilson and Garrett form a strong bond.

Wilson’s especially impressed with the way Garrett’s so helpful to Janey, Connor and Dan’s daughter, who is also deaf. When Wilson’s past shows up in the form of his brother Reggie, bringing unscrupulous people to whom Reggie owes money, life begins to unravel. These thugs don’t care how they get their money, what they have to do, or who they might hurt. Without the strength of love and the bonds of family and friends, Garrett and Wilson could pay the ultimate price.
END_OF_DOCUMENT_TOKEN_TO_BE_REPLACED 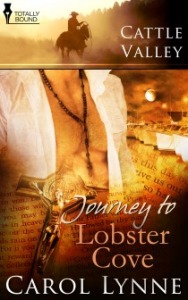 Blurb: Spreading acceptance one town at a time.
When the town of Cattle Valley runs out of room for new construction, Asa Montgomery begins to look into alternative locations. He discovers a small fishing village in Maine for sale and begins to make plans to purchase the picturesque town of Lobster Cove. Unfortunately, setting up a new community takes him away from his partner, Mario, who isn’t pleased about being left behind.

Meanwhile, after years of dancing around their mutual attraction, Cullen Bryant decides the time has come to lay his feelings for Joseph Allenbrand on the line. Unfortunately, his plan is cut short when Joseph sends him away with no other explanation than he should move on.

Joseph knew sending Cullen away was the kindest thing to do for the younger man, but when he hears Cullen truly may be moving on, he realizes it’s time to reevaluate his life. Will he work out his issues in time to save what he’s spent years denying?
END_OF_DOCUMENT_TOKEN_TO_BE_REPLACED

Blurb: Nikhilesh (Nik) Sharma hasn’t been home to Alappuzha, India, since he came out to his family ten years ago. Now that his relationship with them is less strained, he’s bringing his boyfriend Trent along to celebrate the winter holidays. As excited as he is to see everyone again, he worries the foreign culture, religious differences, and disapproval might shock Trent. At the same time, Trent worries Nik’s big, close-knit family won’t accept an American—much less a man—as Nik’s partner and that his presence will impede the otherwise happy reunion. Whether the trip leads to misunderstandings that will drive them apart or to a new understanding that will draw them closer than ever, it’s sure to be an experience they’ll never forget.
END_OF_DOCUMENT_TOKEN_TO_BE_REPLACED

Book Review: Never Too Early: The Beginning by Chris Owen and Tory Temple

Blurb: Firefighters Chancellor Shanahan and Tucker McBride have been together for years. They’ve been through the rough patches and come out the other side, although shift work, misunderstandings, and stubborn personalities can make things interesting. Chance knows that he and Tucker love each other, however, and neither of them have any interest in other people. So what happens when they meet another couple with a similar relationship? An unlikely friendship could take a possible turn.

Jake and Tor are a pair of cowboys who have weathered the storms of a decade together and have finally settled into their lives. They have a ranch, they have family, and they have each other. A rare vacation leads to a friendship, which leads to questions and a revival of long finished conversations. Is moving forward also a step back in time to issues they’ve already put to rest?
END_OF_DOCUMENT_TOKEN_TO_BE_REPLACED