Posts Tagged With: For You I Fall

For You I Fall by T.N. Nova and Colette Davison: Exclusive Excerpt & Giveaway!

Posted on August 29, 2018 by thebloggergirls

Exclusive Excerpt from For You I Fall

Dante settled down on the ground, his wings wrapped protectively around Seth. Looking down into emerald green depths, Dante choked back a cry. Those same brilliant eyes he’d looked into so many times before were wet with tears. Instead of laughter and joy, they held the same sorrow, fear, and pain that Dante could feel through their bond.

“No. This can’t happen. Please, Seth,” Dante pleaded. His voice cracked with despair.

Ignoring the tears rolling down his own cheeks, Dante held Seth close. Dante gingerly caressed his charge’s skin, and wiped the tears from Seth’s cheeks.

He was distraught. The thought of losing Seth overwhelmed him. Dante had never—in all the centuries of time since his creation—felt such crushing pain.

Seth’s lips parted as though he were attempting to speak. It looked like he was trying to tell Dante something, yet no words came out. The pained look filling Seth’s beautiful emerald eyes broke Dante’s heart. He wanted to take all the suffering away from the young man he held in his arms. Dante felt Seth’s labored breathing against him, each breath harder than the last. Dante could hear Seth’s pulse become more erratic, no longer as steady as it once was.

END_OF_DOCUMENT_TOKEN_TO_BE_REPLACED

Book Review: For You I Fall by T.N. Nova and Colette Davison 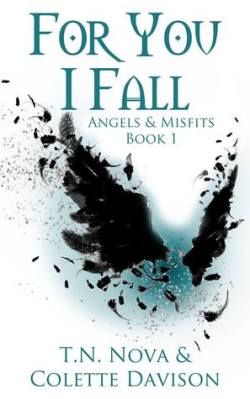 Blurb: Despite having had a rough life, Seth has a big heart. After spending nearly ten years sleeping rough on the streets of New York, he’s managed to get himself freelance work and a place to live. But his new found security is about to be torn apart, as the horrors of his past come back to haunt him in the worst possible way.

Dante was sent to watch over a young Seth when his mother died. As an angel, he had many rules to follow. The most important of which was to never fall in love—especially when it involves a human who is your charge. For the last ten years, Dante has kept his feelings for Seth hidden. That is until the night Seth’s past catches up with him.

When Seth is murdered, their destinies are changed forever. Feelings and emotions come to the surface, but will the rules that govern the afterlife keep Dante and Seth apart for eternity, or will they be able to find their happily ever after together?