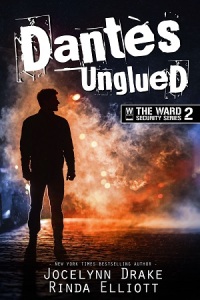 Blurb: When private investigator, Shane Stephens, is hired by the mayor of Cincinnati to track down the hacker who has been threatening him, Shane is sure this is the opportunity to launch the Merleau Detection Agency into the big time. He even convinces Rowe Ward of Ward Security to loan him one of his best IT specialists, Quinn Lake.

Shane, a man who prefers casual intimacy, is surprised by his attraction to the moody computer geek, but when Quinn suggests they have fun for the month he’s on loan, Shane happily agrees. Both men are expecting nothing more than a good time.

But the investigation takes an unexpected turn and they quickly discover they are facing more than a hacker out to ruin the mayor’s re-election chances. And as they spend more time together, they realize their relationship may be a lot more than just a good time.

With only weeks until the election, Shane and Quinn race to gather the proof they need while dodging bullets and possibly…falling in love.
END_OF_DOCUMENT_TOKEN_TO_BE_REPLACED

Book Review: Nothing Special V by A.E. Via 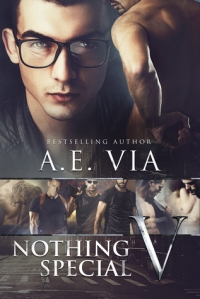 Blurb:  The boys are back and fiercer than ever!

Atlanta’s notorious narcotics task force is at it again. They are stronger, bigger, and better than ever. Especially when a city councilman sends RECON Marine, Edwin Steele – who’s been blacklisted from his Oakland department – to join the team. God and Day weren’t recruiting. They have a lot on their plates, like the fact they’re supposed to be getting married soon. They don’t have the time or the patience to integrate a decorated war hero with a slight chip on his shoulder into their well-oiled machine.

A hothead that’s uncontrollable and terrible with authority… but wasn’t that their team motto?

Steele was ready to hang up his shield. He was done fighting with bigoted bastards that couldn’t respect the job. He was good at fighting; he just needed the right team to fight with. When his uncle – City Councilman, Rasmus Steele – shows him a video of God’s team in action, he knows right away, it’s where his nephew belongs in order to restore his faith.

Steele pointed to the driver, a behemoth of a man wielding those massive firearms like a true beast… like a soldier. “And him. Who the hell is he?”

Steele was skeptical about his new placement, but when he meets God’s technology specialist/computer genius, “Tech,” he’s willing to give it his all, and he definitely shows and proves.

Tech is stunning. His sweater vest and khakis, a stark contrast to the blue-jeaned roughnecks he works with. A beautiful sheep amongst the wolves. Steel thinks there’s no way the brilliant man would be interested in a hardhead like him, but Tech has a few badass hidden talents of his own and manages to fool him… fool all of them.
END_OF_DOCUMENT_TOKEN_TO_BE_REPLACED

Posted on October 10, 2016 by thebloggergirls

Blurb:  Beware the bite of a king.

Khan is a king cobra shifter with a serious mistrust of anyone outside his brothers at Shifter Protection Specialists, Inc. and has good reason for it after he was subjected to the whims and experiments of a mad scientist as a teenager. Since becoming part of a real family, he’s thrived in his job as a close-protection specialist.

One night he meets a pretty human who interests him on a level he hasn’t experienced before, but old fears and revelations force him to put distance between them. Unable to stay away, Khan creates the persona of a courier to deliver the venom Casey needs to see exactly what the human will do.

Dr. Casey Jameson is working toward a deadline. He needs snake shifter venom to continue his research and create a cure to save someone he loves. When he goes in search of a donor, he meets Khan, but he’s confronted with the irresistible, roughness of Khan and he ends up taking the shifter home for the night. However, when Khan finds out who and what he is, Khan leaves him high and dry.

The appearance of Roan, a courier, in his life is perfect timing, but Casey may get more than he bargains for and will soon have to think carefully about who he can trust if he wants to live long enough to complete his work.

When an old lover and boss becomes a real threat to Casey’s safety, Khan must come clean and keep Casey safe before they both lose something precious.
END_OF_DOCUMENT_TOKEN_TO_BE_REPLACED

Blurb:  Two men, one lie, and a whole bunch of trouble.

Marty Valdez is in serious trouble. His sister’s wedding is around the corner, and everyone expects to meet Marty’s super-successful underwear model boyfriend—whom Marty invented. Now Marty has to produce a half-naked hottie or suffer the worst humiliation of his life.

FBI agent Luke Myers is in serious trouble. He’s been working undercover to take down a dangerous drug cartel, but his cover’s blown and he needs to disappear. Luckily, a geeky yet intriguing comic book artist gives him the perfect opportunity. Luke just has to pretend to be his boyfriend, and pretending is what he does best. But between Marty’s mother and his ex, Luke might’ve bitten off more than he can chew, and Marty’s knack for finding trouble might ruin more than just his sister’s wedding.
END_OF_DOCUMENT_TOKEN_TO_BE_REPLACED 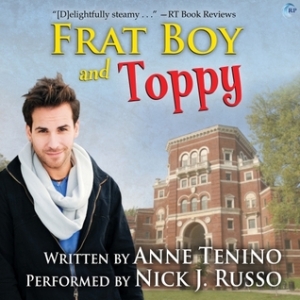 Blurb: Brad is great at meeting other people’s expectations. But his own? Not so much. Take the gay thing. Okay, so yeah. It took a morning meeting with a frat brother’s hairy, naked ass for him to admit it, but he knows the truth about himself now. Let the gay life commence.

Unfortunately, it’s not that easy. He hasn’t quite determined how to come out to anyone, even Sebastian, the geeky-hot TA in his history class. Sebastian is everything Brad is not. Intellectual, suave, hairy. Out. And he doesn’t seem interested in Brad, even when Brad makes a fool of himself trying to catch his notice.

Score one for foolery: Sebastian does more than notice Brad; he takes him to bed. Brad’s been with plenty of girls, but with Sebastian, the sex is something else entirely—hot, mind-blowing, affirming, and a little domineering in a way that drives him wild. But when great sex turns into something more—dare he admit the “L” word?—Brad must face the crushing realization that Sebastian doesn’t feel the same. Unless, of course, he does. After all, even grad students can be idiots about matters of the heart.
END_OF_DOCUMENT_TOKEN_TO_BE_REPLACED

Book Review: All You Can Eat by Ingela Bohm

Posted on February 16, 2016 by thebloggergirls

Blurb:  How do you date someone who doesn’t eat?

Dietician Xavier Deniel is the poster boy for healthy eating. Toned and fit, he practices what he preaches, and his patients keep coming back just for the pleasure of seeing him. His spare time is divided between the gym and the other men who go there, and that’s the way he likes it.

Until Guy turns up. He is Xavier’s opposite in every way: mousy and awkward, sullen and frail. Worst of all, he carries a beast inside him, one that makes all human connection impossible. Lesser men than Xavier would recoil in disgust if they knew, and Guy is not about to reveal his true self to a bloody Frenchman.

But what Guy doesn’t know is that Xavier has stumbled on his half-forgotten blog, the one place where he has confessed all his secrets. When the truth comes out, will Xavier run for the hills – or will he be the one to finally force the beast out in the open?
END_OF_DOCUMENT_TOKEN_TO_BE_REPLACED

Blurb: Honor, integrity, and loyalty are how Deputy US Marshal Kreed Sinacola lives his life. A former SEAL now employed by the Special Operations Group of the US Marshal Service, Kreed spent most of his life working covert operations and avoiding relationships. Never one to mix business with pleasure, his boundaries blur and his convictions are put to the test when he finally comes face-to-face with the hot computer geek he’s been partnered with. Hell-bent on closing the ongoing case for his longtime friend, he pushes past his own limits and uncovers more than he expects.

Aaron Stuart strives for one thing: justice. Young and full of idealism, his highly sought after computer skills land him a position with the National Security Agency. Aaron’s biggest hazard at his job is cramped fingers, but all that changes when he is drawn into the middle of a dangerous federal investigation. Aaron gets more than he bargained for when the FBI partners him with a handsome and tempting deputy US marshal. His attraction to the inked up, dark-haired man provides another kind of threat altogether. Aaron tries desperately to place a firewall around his heart and fight his developing feelings, knowing one misstep on his part could ultimately destroy him.

The solution isn’t as easy as solving the case, which is treacherous enough as it is. But the growing sexual attraction between them threatens to derail more than just Kreed’s personal convictions as he quickly learns temptation and matters of the heart rarely fit easily into the rules he’s lived by. Will Kreed be able to convince Aaron to open his heart and face the fact that sometimes the answers aren’t always hidden in code?
END_OF_DOCUMENT_TOKEN_TO_BE_REPLACED

Posted on January 26, 2016 by thebloggergirls

Blurb: Jason Day, brilliant designer of video games, is not only a confirmed bachelor, but he’s as gay as a maypole. One wouldn’t think being saddled with his precocious four-year-old nephew for four weeks would be enough to throw him off-kilter.

But just when Timmy and Uncle Jason begin to bond, and Jason feels he’s getting a grip on this babysitting business once and for all, he’s thrown for a loop by a couple of visitors—one from Tucson, the other from beyond the grave.

Toss a murder, a hot young stud, an unexpected love affair, and a spooky-ass ghost with a weird sense of humor into Jason’s summer plans, and you’ve got the makings for one hell of a ride.
END_OF_DOCUMENT_TOKEN_TO_BE_REPLACED

Posted on January 6, 2016 by thebloggergirls 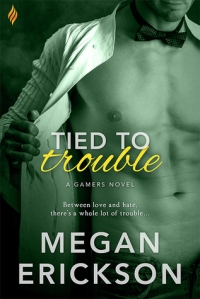 Blurb:  Between love and hate, there’s a whole lot of trouble…

Chad Lake only showed up at his sister’s party for the free food, but when he spots an uptight nerd at the edge of the crowd, he can’t resist trying to ruffle the guy’s perfect bow tie and impeccable hair. The hottie’s ready for him, though, and in the end, it’s Chad who’s left wide-eyed, his ears still ringing with the filthy things Bow Tie whispered in his ear. No one gets the upper hand on Chad. Ever.

Owen Hawkins has heard all about the cocky Adonis from Chad’s sister—the same sister who holds Owen’s career advancement in her hands. He has every intention of steering clear of the other man…until Chad’s sexy taunts push him too far. There’s something intriguing about Chad, and even though Owen knows that getting tangled up with the infuriating man is trouble, he can’t seem to stay away…