Book Review: Nothing Special V by A.E. Via

Blurb:  The boys are back and fiercer than ever!

Atlanta’s notorious narcotics task force is at it again. They are stronger, bigger, and better than ever. Especially when a city councilman sends RECON Marine, Edwin Steele – who’s been blacklisted from his Oakland department – to join the team. God and Day weren’t recruiting. They have a lot on their plates, like the fact they’re supposed to be getting married soon. They don’t have the time or the patience to integrate a decorated war hero with a slight chip on his shoulder into their well-oiled machine.

A hothead that’s uncontrollable and terrible with authority… but wasn’t that their team motto?

Steele was ready to hang up his shield. He was done fighting with bigoted bastards that couldn’t respect the job. He was good at fighting; he just needed the right team to fight with. When his uncle – City Councilman, Rasmus Steele – shows him a video of God’s team in action, he knows right away, it’s where his nephew belongs in order to restore his faith.

Steele pointed to the driver, a behemoth of a man wielding those massive firearms like a true beast… like a soldier. “And him. Who the hell is he?”

Steele was skeptical about his new placement, but when he meets God’s technology specialist/computer genius, “Tech,” he’s willing to give it his all, and he definitely shows and proves.

Tech is stunning. His sweater vest and khakis, a stark contrast to the blue-jeaned roughnecks he works with. A beautiful sheep amongst the wolves. Steel thinks there’s no way the brilliant man would be interested in a hardhead like him, but Tech has a few badass hidden talents of his own and manages to fool him… fool all of them.
END_OF_DOCUMENT_TOKEN_TO_BE_REPLACED

Book Review: The Secrets in My Scowl by A.E. Via

Posted on October 28, 2016 by thebloggergirls 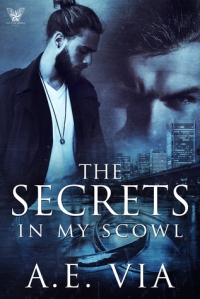 Blurb:  Sparks ignite and tempers flare when a sexy, optimistic wedding planner, moves his business in across the hall from a jilted, divorce lawyer’s practice.

“Look smart ass. This is the last time I’m going to remind you about breaking sections of the lease. If there’s a next time, I won’t stop until you and your frilly, white wedding shit is thrown out of here. Do you got it?!”

Wylde looked in Jacob’s pained eyes and answered in his deep voice. “Yeah, counselor. I got it.”

From high school, up until he became a successful attorney Jacob Snowden was convinced that love had it out for him. “Everyone left,” were the words he lived by. His mother, his high school sweetheart, his father, and his fiancé, all left Jacob just when he felt it was safe to let down his guard. Not any longer. Jacob was a determined man, set at keeping people at a distance. If his six foot one, military-made body didn’t scare people off, his permanent scowl surely did. At almost forty, Jacob’s social life was non-existent, but he told himself his work fulfilled him. He helped people get out of their loveless marriages. Jacob Snowden was one of the best divorce lawyers on the east coast and was damn proud of it. So, imagine his disdain when a wedding planner moves into the suite directly adjacent to his… an insanely masculine, male wedding planner.

Wylde Sterling had made quite a name for himself in his hometown of Roanoke, Virginia, working for a wedding planner that catered to the elite. He was known for his charm and impeccable taste. Yep, he was incredible at giving couples the wedding of their dreams. But he wanted nothing more than to plan his own. After striking out in love more times than he cared to admit, Wylde decided to start his own business in a new city, hoping Richmond would give him a fresh start. Things started out wonderfully – until he started to piss off the angry divorce attorney next door.

Wylde could see past Jacob’s mean scowl, knowing there was a reason for it. It was the man’s defense mechanism, his means of keeping people away. Everything in Wylde told him to stay away, but he believed Jacob just needed to meet a man who had been hurt as badly as he had.
END_OF_DOCUMENT_TOKEN_TO_BE_REPLACED

Book Review: Blue Moon III: Call of the Alpha by A.E. Via

Posted on August 4, 2016 by thebloggergirls

Blurb:  THIS IS THE THIRD INSTALLMENT IN THIS SERIES and CAN STAND ALONE.
Book 2 is recommended to read first.
The Story of ALPHA, CALL, OMEGA & LION ALONG WITH A COUPLE OTHER FAVORITES

It’s been a couple years since Commander John Marion – the US Navy’s most decorated SEAL – hung up his dog tags, choosing his cherished Alpha over war.

Call and Alpha have settled comfortably into their carefree lives nestled in the mountains of South Carolina. No more combat for the Commander and no more ordered killings for the deadliest assassin in the world.

However, nothing stays peaceful forever.

When Alpha’s brother Omega comes to their secluded home with a distressing message from their Order, Alpha has to answer the call. But what neither of them expect is for the Order to send them a new assassin, one just as deadly as both of them, to seek their counsel and bring them back Persia.

Lion’s commanding presence was not at all what any of them anticipated. Especially Omega. Lion realizes what Omega is to him right away, but the stubborn man fights his every advance. Lion knows he and Omega have to connect if they’re going to be victorious. He was sent to bring back an army but if he can’t get his cherished to yield to him, they are sure to fail.

Call refuses to let Alpha fight a gang of rebel assassins without him. Omega will fight by his brother’s side, no matter what… and Hawk saw them coming for his help before anyone else. Together they’ll fight the toughest opponents they’ve ever faced. As always… these badass warriors are up for the challenge.
END_OF_DOCUMENT_TOKEN_TO_BE_REPLACED

Book Review: Succumbing to His Fear

Blurb:  After a life changing event makes Alfie the legal guardian of his estranged step-siblings, as well as a chance meeting one drunken night, he finds his world turned upside down when he discovers that everything he thought he knew about himself was catastrophically wrong.

Before meeting Alfie and his family, Fear was content with his casual hookups and one-night stands, purposefully keeping everyone at an arm’s length. As Alfie comes into his burgeoning feelings, a curveball shakes the two men, threatening to destroy Fear and his new found chance at happiness with Alfie.

With everything thrown into turmoil, Fear decides to fight for those he loves, Alfie and his family included. Will they be able to survive the collateral damage around them, or will they lose everything?

END_OF_DOCUMENT_TOKEN_TO_BE_REPLACED

Posted on January 11, 2016 by thebloggergirls 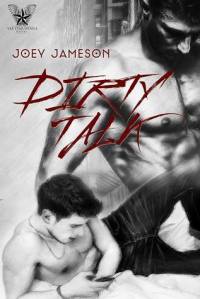 Blurb:  Vegas is a hot phone sex operator who knows just how to make your deepest, darkest fantasies come true either with a gentle whisper in your ear or with a rough growling command. When he’s in control, you know you’re in good hands. Vegas can tickle or scratch whatever itch or fetish a caller can throw at him.

But his job at the exclusive ‘Black Vanilla’ has its dark side, which becomes all too clear when Vegas receives a call one night that hits a little too close to home.

Somewhere out there, someone’s watching him. Someone who’s taken their fantasy one step too far. It isn’t long before Vegas finds himself entangled in a web of dark and dangerous obsession. An obsession that can only end one way.

“Dirty Talk” will take you deep into the world of stimulating oral desire and blur the lines that exist between our ultimate fantasies and harsh reality.
END_OF_DOCUMENT_TOKEN_TO_BE_REPLACED

Book Review: Defined by Deceit by A.E. Via

Blurb:  Life isn’t always fair, and that’s something that Llewellyn Gardner knows about first hand. His life was on the fast track until one night of extreme passion changed everything. Now eight years later, he’s still living with the aftershocks of that night. Everywhere he turns or runs, there’s another reminder. What the hell do you do when you try to drown your demons only to find out they can swim?

Shane Smith, Jr. owner of Smith Construction, could see the emotional turmoil within his new employee — it’s why he hired him. There was something about the gorgeous, misunderstood man with the overly expressive eyes that came to their small town with a past no one was willing to overlook. Shane could see the good in Llewellyn, and those eyes of his were a clear window to his soul. Shane wasn’t going to let the man live a future of solitude because his past had been plagued with deceit.

Llewellyn wasn’t sure what to think about Shane. After years of protecting himself from being tricked twice, he was now faced with worry again. What would happen to him if Shane didn’t believe his truth, and walked away? Llewellyn wasn’t sure he’d be able to survive being left alone. Again.

END_OF_DOCUMENT_TOKEN_TO_BE_REPLACED 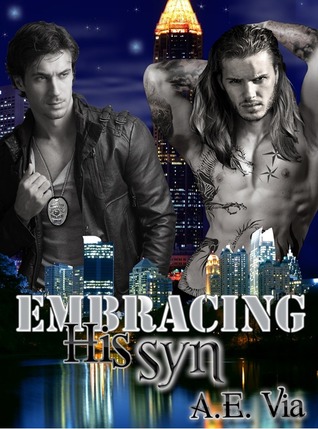 Disclaimer: This book DOES NOT contain scenes of polygamous sexual pairings.
END_OF_DOCUMENT_TOKEN_TO_BE_REPLACED