Posts Tagged With: Looking For More

We’ve got TWO giveaways to announce winners for! 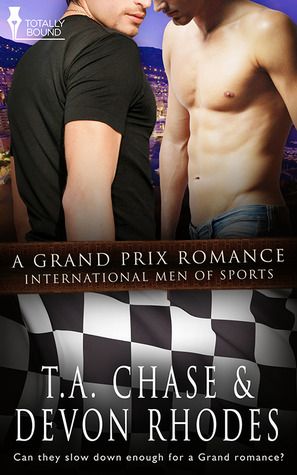 So, the winner of an eBook of A Grand Prix Romance by T.A Chase is… END_OF_DOCUMENT_TOKEN_TO_BE_REPLACED

I don’t write contemporary very often. It is usually more fun for me to make things up entirely than stick to an established world where I’m forced to abide by certain rules and limits (although I often ignore them anyway, for better or worse).

When I do write contemporary, without any sort of paranormal or fantasy frill to it, 99% of the time it’s by request or for a specific person. Looking for More was written primarily with Samantha in mind. She is my sister, EIC for Less Than Three, and has been editing my stories for nearly as long as I’ve been writing them. And she wanted a story about a gamer geek.

That particular element did not play as big a role as I had initially wanted, but this was good practice for the hardcore gamer story I do intend to write for her. Amusingly, Samantha was also my consultant for those elements of the story. I am not a gamer anymore, have not been for years, and the gaming world now is not even close to how it was when I left. If I got anything right in LFM, it’s thanks to Samantha, and anything wrong is on me.

I pulled a lot of elements from my own life, and my family, though I didn’t set out to do that. Milo’s job as a foot runner was my job for a few years when I lived in Cincinnati. The way he got smacked in the face with a door came from similar such encounter I had. People fling doors open all the time, and you kind of learn to watch out for that. Knowing the receptionists and other couriers and delivery people—that is very much true. Asshole bosses that make you run all the way across town ten minutes before everything closes is also very true -_- I never got to include all the crazy people you run into on the streets in a job like that.

The broken nose is perhaps the funniest story. That was stolen from my father, who I called to ask about having a nose broken because I have not yet managed to do it myself, but he’d had his broken seven times. That turned into a two hour conversation where I mostly laughed at his pain like the jerk daughter I am (I really really am. I don’t remember how old I was when it happened, but the short version is that my dad’s left middle finger got torn off. When he came home from the hospital, I held up my hand and asked him how many fingers it was. He said five. I said no, he couldn’t do five anymore. In my defense I am a product of my smartass environment). So my father told me all about his broken noses, and I pieced together Milo’s fate from those.

My parents are my consultants for many things, since they have pretty kickass histories themselves that I am happy to borrow/steal :3 Although I’m pretty sure all the questions about murder and death and bodies have put my father and I on the watchlists. Whatever, stories have to get written.

Milo’s love of sour candy came from me. His love of stouts I stole from Sasha. I added some Doctor Who mentions because my sisters have dragged me into the fandom with them (I’m going to cosplay as Rose at Yaoicon this year :D).

I think the point of all this rambling is that while write what you know is often the dumbest advice to give someone, there are times where it can be a lot of fun to write what you know, or shamelessly steal what your family knows.

So it might not be the most involved or complex story I’ve written, but I am fond of it and I hope the peeps that have read it have enjoyed it, too.

Much love to everyone who has stopped by. Hearts and thanks to the Blogger Girls for having me, and I hope everyone is having a lovely week.

About Looking for More

Milo has a pretty good life: nice house, decent job, plenty of time to devote to the movies and games he loves. He also has a hot neighbor, Lewis, who frequently comes by to drag Milo out of his house. If Milo wishes they were more than neighbors, well, he’s working on it.

About the Megan Derr

Megan is a long time resident of m/m fiction, and keeps herself busy reading, writing, and publishing it. She is often accused of fluff and nonsense. When she’s not involved in writing, she likes to cook, harass her cats, or watch movies (especially all things James Bond). She loves to hear from readers, and can be found all around the internet.

Megan has graciously offered up a chance to win an eBook copy of her book Looking for More to one lucky winner! The giveaway starts now and ends July 22, 2014 at 11:59 p.m. To enter, just click the link below!

Don’t forget to check out Nikyta’s review of Looking for More to see what she thought of it!

Blurb: Milo has a pretty good life: nice house, decent job, plenty of time to devote to the movies and games he loves. He also has a hot neighbor, Lewis, who frequently comes by to drag Milo out of his house. If Milo wishes they were more than neighbors, well, he’s working on it.

Note: This story was initially published in Less Than Three’s That Famous Happy End anthology. It has been re-edited and given a new ending.
END_OF_DOCUMENT_TOKEN_TO_BE_REPLACED