Posts Tagged With: Series – Paranormal Dentistry For the Fanged and Friendly

Book Review: A Spark of Chipmunk Love by Jackie Nacht

Sparks came into White Pine with a bang – ¦literally. He’s the town troublemaker and owns it. That is until Sparks meets the town sweetheart, Simon. Simon works at the Nut and Leaf Cafe. Since the day Sparks started working there, his world has been turned upside down. What’s a mouse to do when the bad boy chipmunk is chasing after him?
END_OF_DOCUMENT_TOKEN_TO_BE_REPLACED

Book Review: Hot on a Chipmunk’s Tail by Jackie Nacht

Blurb: This mountain lion is out to chase his skittish chipmunk down.

Jason has always lived under the protection of his twenty brothers and sisters. Even though he cares for his neighbor, Will, when a chance to leave the home he’s lived in forever, Jason takes the chance and runs to White Pine. Unfortunately, some of his brothers are coming along for the ride.

Will can’t believe his shy chipmunk just up and moved. Through the meddling of Jason’s sisters and a best friend who lives in White Pine, Will chases Jason to White Pine. Will they be able find the connection in White Pine where they couldn’t at home?
END_OF_DOCUMENT_TOKEN_TO_BE_REPLACED 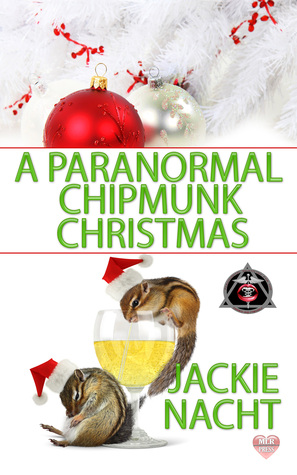 Blurb: It’s time for the chipmunk brothers to take their bear and wolf home to meet the family for the holidays.

A vicious horde of chipmunks? Dallas and Gunner knew that meeting their mate’s family wasn’t going to be a walk in the park. How could it be when they had eighteen brothers and sisters? This bear and wolf are about to be put to the test—surviving this family holiday. Will they be able to escape just the four of them or will they be taking some of the siblings back to White Pine…involuntarily?
END_OF_DOCUMENT_TOKEN_TO_BE_REPLACED 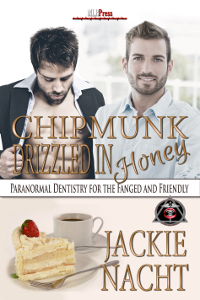 Blurb: Even this grumpy bear can’t resist this chipmunks charm.

Dallas likes the life he has. He’s the proud owner of the donut shop, Honey Cakes, and now owns the home he grew up in White Pine. He thought his life was perfect until Nikko the chipmunk sashayed into his life. Now, Dallas doesn’t know if he wants to push the spunky chipmunk away or make love to him.

Nikko has known since the moment he saw Dallas that he wanted the bear. Nothing, even the grouchiness of the gorgeous bear will keep him from making Dallas his own. But how can Nikko get Dallas to see they belong together?
END_OF_DOCUMENT_TOKEN_TO_BE_REPLACED

Posted on December 19, 2014 by thebloggergirls

An Exclusive Excerpt from A Paranormal Chipmunk Christmas

Gunner groaned, feeling his brain try to fire up and wake. He was groggy and swore if he ever took another motion sickness pill, he would follow the directions to the letter. He rolled over and promptly fell off the bed, knocking into containers. There was a sound from above, and then Gunner felt his whole body being covered.

“What the…” Gunner covered his head, blind to the tiny objects falling all over him.

He was in utter darkness, and his brain was having an impossible time catching up as the stuff kept falling on him.

The door opened, and a ray of light appeared. “Gunner!” Phillip cried out.

Gunner stayed where he was as Phillip ran to him, shielding himself. The falling objects stopped, and Gunner sat up a little to get a look at what was going on. He was surrounded by acorns and various nuts.

Gunner stared up wide-eyed at his mate. “I’m buried.”

“Oh my God! One of the boxes opened.” Phillip scurried over and began to push the acorns away from him. Gunner glanced up at his mate, the remaining nuts falling down his back and onto the floor below.

“Where am I?” Gunner felt like someone had just tried to bury him alive. He was going to have nightmares about this for sure.

“This is your bedroom? These are yours?” Gunner asked as he pointed to the boxes that stacked and lined the walls.

Phillip blushed as he plucked an acorn off Gunner’s shoulder. “Well, it was. I think my parents renovated it after I moved to White Pine.”

Gunner blinked. Then he blinked again. This was always a delicate topic with Phillip. Phillip called it being prepared, but his old bedroom was fucking full of nuts. Gunner wondered what they were preparing for, the apocalypse?

“Are we staying in here, or is it…” Gunner coughed as he said, “storage?”

“Well, I know the twin is a bit tight, but it’s only for a couple of nights.” Phillip smiled sweetly at him.

Twin? He couldn’t fit in a twin by himself, let alone two of them. How the hell were they going to sleep in there? Not to mention that the walls—err boxes were closing in on him.

About A Paranormal Chipmunk Christmas

It’s time for the chipmunk brothers to take their bear and wolf home to meet the family for the holidays.

A vicious horde of chipmunks? Dallas and Gunner knew that meeting their mate’s family wasn’t going to be a walk in the park. How could it be when they had eighteen brothers and sisters? This bear and wolf are about to be put to the test, surviving this family holiday. Will they be able to escape just the four of them or will they be taking some of the siblings back to White Pine…involuntarily?

Short, sexy and sweet— where a little love goes a long way.

That’s the best way to describe Jackie Nacht’s stories. She was introduced to M/M Romance through her sister, Stephani, and read it for years. Then, she thought it was time to put her own stories on paper. Jackie began writing short and sweet stories that ended with a happily ever after.

Thinking back to her own book addiction, where there were many nights Jackie stayed up way too late so she could read just one more chapter— yeah, right— Jackie decided to write short romances for young adults as well as adults. Hopefully, they will give high school and college students, or working men and women something they can read during their lunch hour, in between classes or just when they want to briefly get away from the daily stresses of everyday life.

As part of this blog tour, Jackie is giving away a $25 Amazon Gift Card!! To enter, just click the link below!