Posted on December 3, 2015 by thebloggergirls 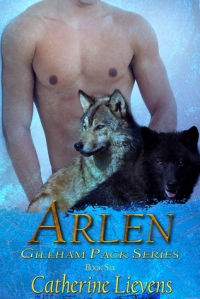 Blurb:  Arlen’s been stuck in his wolf form for months and he’s had to watch his mate fall in love with another man and live with him. To his surprise, Arlen falls in love with both men, so when he becomes human again, he knows exactly what he wants—both Gentry and Nick.

Nick accepts Arlen’s solution more easily, even though he isn’t sure his wolf will be happy with it. But the wolf wants both Gentry and Arlen, and after a bit of stumbling, the three settle in their new throuple.

Will Nick and Arlen be able to resist the urge to mate and really include Gentry, or will Gentry end up alone and rejected? And how will their families and friends react to their solution?

Review: Arlen came from the Glass Company rescue. He’s been in wolf form due to an implant for the last 18 months. When he’s rescued, he’s placed in the home of Nick and Gentry. Nick, it turns out, is Arlen’s fated Mate, but Arlen has no way to let him know that and since Nick and Gentry are a committed couple, Arlen runs away – briefly.

His wolf won’t let Arlen stay away too long, and eventually he returns. He ends up watching Nick and Gentry and grows to gradually not only accept their relationship but finds himself in love with Gentry, as well as Nick.

When he finally is able to transform back into human, Nick realizes Arlen’s his Mate. Gentry immediately offers to leave, knowing how important the Mate Bond is, but Arlen won’t have it. Instead, he offers them the solution of trying on being a “throuple” or a three-way-couple.

At first, there’s resistance from both Nick and Gentry, but the loneliness and love everyone both fears and wants drives them to give it a shot.

There are books in this series that are hit and those that are a miss – this is a HIT! I really liked it and found it to be rather refreshing and unique.

The throuple dealt with the “mate bond” stuff and really just focused on three guys trying to establish a relationship with one another. There were a couple hot smexy scenes, but most of it was them working things out.

I liked that they confronted real life issues – like cleaning, bills, cooking, etc. and acknowledged that mate bond or no, communication was the key to success.

So, for fans of the series, shifter romances and ménage, I recommend this and give it a 3.5 of 5 stars.