Blurb:  According to legend, when humankind is at its most desperate, the goddess Sirius will send three of the most powerful werewolf shifters ever created to save mankind. However, because they are so powerful, they will need a fourth to complete them, to calm them and help them reach their full potential.

Aden, a young were, has been his pack’s omega ever since, at the age of fifteen, he didn’t shift like everyone else. Caught, reviled, and tortured because of his empathic abilities, he knew on the night he was told to run as sport for the pack hunters that it would end in his death. What he didn’t know, however, was that on the same night he’d also meet the love of his life and a pathway to answers, because Aden is far more than just a pack omega.

What begins as a hunt soon becomes a new adventure as Aden discovers that he has not only one, but three destined mates, and his role as lover is far more than trivial. The fate of all humankind rests upon it.
END_OF_DOCUMENT_TOKEN_TO_BE_REPLACED

Blurb: All Evan Savage wanted was a quiet night at the bar, waiting for his boyfriend to finish his shift; what he gets instead is a nightmare. Things were complex enough when his biggest problem was the tangled sex life he and his brother Brennan share with twin lovers Alek and Luka. When a selfless act ending in terrible violence lands Evan in the hospital, Brennan and Evan’s father returns to loom over their lives, asking questions none of the four want to answer.

The young men’s relationships to each other begin to unravel as carefully drawn boundary lines are blurred and crossed. The four must question the nature of their commitments to each other, what they each want, and what to say to those relentlessly demanding the truth. When the most dangerous thing you can do is admit to who you love, and jealousy is a luxury you can no longer afford, brutal honesty is the only remaining key to salvation… 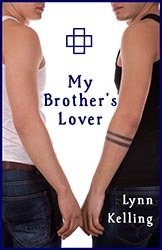 Blurb: Growing up gay in a small town with no mother, Evan Savage learned the hard way to cherish his secrets above all else. Now he’s 18, not even his father can hurt him anymore. When his long-lost twin brother Brennan shows up out of nowhere looking for a new home, Evan’s world, and his very identity, comes crashing down around him all over again. Brennan treats nothing as sacred in his search for a family connection after their mother’s death.

Frustrated and reckless, anonymous sexual encounters are just the first step on a journey of self-discovery for both Evan and Brennan. The sweetness of first love with twin brothers Alek and Luka leads them find in each other things they never knew they had lost…

…and lures them all into danger.
END_OF_DOCUMENT_TOKEN_TO_BE_REPLACED