Posted on December 11, 2018 by thebloggergirls

Blurb: Darren’s a pretty normal teenager: high school, exams, hanging out with friends, puberty. The whole half-fae thing adds some complications and being a trans guy makes his life a little more difficult, but he can’t complain. That is, until a newly turned vampire moves in with the witch down the street. Vlad, surly and standoffish, doesn’t seem to like Darren very much, so Darren is content to give him a wide berth—at first. As they grow closer, Darren realizes Vlad is having a hard time adjusting to his newfound vampirism, and since Darren knows how it feels to be uncomfortable in your own skin, he thinks he can help. While it turns out Vlad is pretty great, his problems are deeper than Darren realizes, and more dangerous.

Despite the dangers, feelings begin developing between the two young men.

Darren just hopes he’s not in over his head. END_OF_DOCUMENT_TOKEN_TO_BE_REPLACED

Posted on November 20, 2018 by thebloggergirls

In the course of his work with the Asheville Paranormal Council, reclusive three-hundred-year-old vampire Julian Schaden discovers young Thomas Carter, the heir to a long line of demon hunters—a legacy Thomas knows nothing about.

He also knows nothing about the supernatural world or the danger he’s in. As Julian convinces him and later agrees to train Thomas to use his abilities, he struggles against unexpected feelings. Thomas is too young and innocent to become involved with Julian, but opposites attract, and this is one battle Julian is fated to lose….

Julian and Thomas grow closer as the demonic menace advances. A prophecy from a dying mage comes with a bleak warning: to save Thomas’s life, Julian might have to give up the only man he’s ever loved. END_OF_DOCUMENT_TOKEN_TO_BE_REPLACED

Blurb:  Just a little Love Bite: When the unexpected happens, it doesn’t always mean the end.

When the Horseman of War decides to have a little fun and he accompanies a favored demon into the human realm to join in a skirmish, he never expects to meet a vampire that jumpstarts his libido. A romp with Monte Hanover would be fun, passionate, and maybe even worthy of a repeat…after they finish the battle, of course. To his surprise, he helps rescue a prairie dog shifter that brings out protective instincts he didn’t even know he was capable of. Unfortunately, little Xerxes turns out to be Monte’s beloved. Scratching his itch with either man seems unlikely. Then, the unthinkable happens, and he realizes without his intervention, it would mean the death of both men. Can he take that leap? Or will War decide two lives, in the grand scheme of things, isn’t really worth the changes he’d need to make?
END_OF_DOCUMENT_TOKEN_TO_BE_REPLACED

Book Review: What Everyone Deserves by Dan Ackerman

Posted on October 31, 2016 by thebloggergirls

Blurb:  In this 1950s period drama, Junius is a New York City fertility demon with a crush. Ever since falling from heaven he’s been alone. Except for the mothers and children he watches over.

James Kelly Rosenburg, a black soldier with snowflakes in his hair, walks right into his life with a big problem. James Kelly, turned vampire during the war, is new to New York and its prohibition against vampire killing in city limits.

Junius offers to teach him to overcome his bloodthirsty instincts and live a proper Manhattan life. Their growing friendship leaves them both conflicted as they explore a city both welcoming and alienated by their kind.
END_OF_DOCUMENT_TOKEN_TO_BE_REPLACED

Blurb: King Dante places Shelby in the protective custody of the Angel Pack to guard the secret of who he truly is and what he is capable of. Shelby has known who his mate is since before he was kidnapped by his psycho father six months ago. But now he fears that being in the same house as his mate will finally show Xander who he is. He has been hiding from his mate, but now that they are face-to-face Shelby needs to stay strong and reject Xander. He can’t afford to get attached to anyone and have them turn on him when they find out the truth.

But Xander won’t give up on his mate and does everything he can to show the gorgeous man that he wants him for who he is and will never try to control him or tell him what to do. The battle to save their world explodes at the same time the battle to save his mating puts Shelby in danger.

END_OF_DOCUMENT_TOKEN_TO_BE_REPLACED

Posted on November 18, 2015 by thebloggergirls

Blurb:  One guy with a bad nose and the other unable to taste blood, this werewolf and vampire have one awkward mix up.

Marshal is just having a good time at an abandoned house near his pack territory. When he’s shoved in the darkened den for a childish game, seven minutes in heaven, he decides what the hell and has some fun with the guy accompanying him in the darkness.

Brandon wasn’t sure what happened. One minute, he’s getting a moment alone, the next, he’s getting real close to a guy that stumbled into his solitude. Not all is as it seems, and when the lights come on, all hell breaks loose.
END_OF_DOCUMENT_TOKEN_TO_BE_REPLACED

Blurb: Caleb Jansen’s old life is in ruins after being possessed by the vampire spirit Gray. Now all Caleb wants is for Gray to be exorcised so he can adjust to living as a registered paranormal. Instead, District Chief Kaniyar of SPECTR offers him a new choice: be locked away for public safety, or come work for the very agency he’s spent years trying to avoid. The only good thing to come from Caleb’s possession is his relationship with federal exorcist John Starkweather, but even that seems doomed to end before it can really begin.

John’s newest case is a nightmare: someone is summoning demons and forcing them to possess women and boys snatched from the streets of Charleston. If his team can’t find the summoner soon enough, the possessions will become permanent, transforming the victims into ghouls. To make matters worse, he barely prevents Gray from feeding on their only lead.

Can John shield his heart from Caleb, who only seems interested in a temporary hook-up? Can Caleb keep Gray under control while they hunt for the summoner? Or will the cost of solving the case be higher than any of them could have guessed?

Because the master of ghouls has set his sights on a new target: Gray.

END_OF_DOCUMENT_TOKEN_TO_BE_REPLACED

Blurb: Unregistered paranormal Caleb Jansen only wants a normal life. But when a demon murders his brother, Caleb knows he has to avenge Ben’s death, no matter what the cost. Unfortunately, his only allies belong to an extremist group who would kill Caleb if they found out about his talent.

Gray is a wandering spirit, summoned to hunt and destroy demons by drinking their blood. This hunt goes horribly wrong, and for the first time in his existence Gray is trapped in a living, human body. Caleb’s body…and Caleb is still in it.

Hotshot federal agent John Starkweather thinks he’s seen it all. But when he’s called to exorcise Caleb, he finds a creature which isn’t supposed to exist outside of stories. For Gray is a drakul: a vampire.

Having spent his life avoiding the government as an unregistered ‘mal, Caleb can’t let himself trust a federal exorcist, no matter how sexy. And he certainly isn’t going to give into the heat growing between them and sleep with Starkweather.

Can Starkweather win Caleb’s trust and convince him he isn’t the enemy? Can Caleb keep Gray under control, as the drakul experiences the temptation of a living body for the first time?

Because if he fails and Gray gives in to bloodlust, Starkweather will have no choice but to kill them both
END_OF_DOCUMENT_TOKEN_TO_BE_REPLACED

Blurb: Determined to solve a string of brutal slayings in London, vampire warrior Mathias Rowan is forced to seek the help of Nova, a fiery tattoo artist who ignites an unexpected, yet undeniable, passion in the grim Order enforcer.

Nova’s shadowy connections and dark talents may be Mathias’s best hope of unmasking a treacherous enemy . . . but falling for a woman with her dangerous past will risk both their hearts and their lives
END_OF_DOCUMENT_TOKEN_TO_BE_REPLACED

Book Review: The Edge of Hope by Aline Popescu 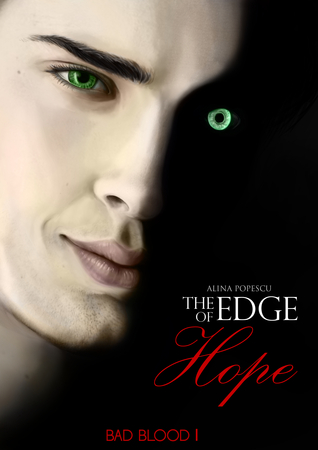 Blurb: When tall, dark, and gorgeous shows up on your self-prescribed emotional recovery vacation, some would call it fate smiling down on you. If he also happens to be interested in your work and ready to make all the room you need in his life, it starts to sound too good to be true. Alexa skips the doubts and jumps right in, only to be thrown into the mysterious world of vampires.

The secrets of their origin and their very existence are far more important than her life to some of her new acquaintances. They are ancient, they are powerful, they have unlimited resources, and they are keen on controlling what the world knows of their kind. As Alexa discovers their complicated, blood feud bound world, she tries to better understand herself, heal old wounds and give love chance after chance. Will she survive the journey?