Posted on December 16, 2019 by thebloggergirls

Giving Ian Pierce His Happily Ever After

Within the Unbreakable Bonds world, I don’t think there’s anyone who deserves a happily ever after more than our chef and all-around sweet guy Ian Pierce. The trauma and abuse he suffered before the series even opened meant that we had to be very cautious with how we proceeded.

The first step was finding the right guy.

Well, Ian sort of solved that problem for us when he first set his eyes on Hollis Banner, Cincinnati cop and busybody. Ian took one look at that tall drink of water and decided that he was very thirsty indeed.

That meant we had to make sure that Hollis was properly whipped into shape. He had to be a great, kind-hearted guy who was dedicated to protecting the little guy and taking out the bad guy at any cost.

It also didn’t hurt that he was tall, muscly, and sexy as hell. Yeah, Ian took on look at him and wanted to climb him like a tree. Not that we could blame him after all.

Once we had the right guy, we knew that Hollis had to know the whole truth. All of it. Ian couldn’t be allowed to hold anything back when it came to his past. It couldn’t be something that was standing between them, or they’d never make it long term. That was a big secret to reveal. It was a scary weight for Ian to place on Hollis, but it was also a terrifying thing for Hollis to deal with. He had his own emotions to process, but he was also worried about how to treat Ian after he knew. Hollis didn’t want to cause Ian any more pain than he’d already suffered.

With some time and hard work, Ian and Hollis found their balance.

But the work wasn’t done.

When Rinda and I started working on Rialto, we realized that while Boris Jagger might be dead and gone, his ghost was still haunting them both. Trauma and suffering like what Ian suffered was not something that was easily dealt with. It’s an ongoing healing process. It’s baggage that needs to be unpacked rather than hidden away and ignored.

As Ian faced an unknown villain in Rialto, we knew it was time for Ian and Hollis to face some very hard truths and start working to some healing that was long overdue if they were going to get their happily ever after. Sometimes, the steps we take to protect ourselves can be more damaging than the pain we’re trying to avoid.

And while the Unbreakable Boys are always there to support Ian, this was a step that Ian and Hollis had to take on their own.

I hope you’ve enjoyed hearing about the creation of Ian and Hollis from the Unbreakable Bonds world. If you’ve not read the series yet, we hope that you make a stop in Cincinnati and meet the boys. The series is now complete with eight novels and four short story collections. Jump into the adventure today!

END_OF_DOCUMENT_TOKEN_TO_BE_REPLACED

Blurb: The rings have been selected.

The champagne placed on ice.

And the pre-wedding sex is off the charts…

Lucas Vallois and Andrei Hadeon are finally ready to walk down the aisle. There’s just one small problem.

A ghost from Lucas’s past shows up days before the wedding, desperate for help. Against his better judgement, Lucas and his best friend, Ashton Frost, plan a fast trip back to the one place they swore they’d never go: their hometown in Oklahoma. But the danger is worse than they expected.

Now, they’re in a race to track down a killer, keep a young girl safe, and get Lucas back in time to say, “I do.” END_OF_DOCUMENT_TOKEN_TO_BE_REPLACED

The rings have been selected.

The champagne placed on ice.

And the pre-wedding sex is off the charts…

Lucas Vallois and Andrei Hadeon are finally ready to walk down the aisle. There’s just one small problem.

A ghost from Lucas’s past shows up days before the wedding, desperate for help. Against his better judgement, Lucas and his best friend, Ashton Frost, plan a fast trip back to the one place they swore they’d never go: their hometown in Oklahoma. But the danger is worse than they expected.

Now, they’re in a race to track down a killer, keep a young girl safe, and get Lucas back in time to say, “I do.”

Blurb: Unbreakable Stories: Ian is a collection of short stories following the ups and downs of Ian Pierce and Hollis Banner has they navigate their new relationship and the unique complications of dating with a brunch of overprotective “brothers” determined to guard Ian’s heart.

This collection is more than 38,000 words and contains short stories such as:
Midnight Perp
No Boyfriends Allowed
A Night Off
Taking It Slow
This is Us
And a very special bonus.
END_OF_DOCUMENT_TOKEN_TO_BE_REPLACED

This collection is more than 30,000 words long and contain stories such as:
Piece of Pie
Mistletoe
Haunted
Gotcha
And many more…
END_OF_DOCUMENT_TOKEN_TO_BE_REPLACED

Posted on June 5, 2017 by thebloggergirls

Unbreakable Stories: Snow is a collection of short stories and a novelette set after the events of Shatter, book 2 of the Unbreakable Bonds series and before Torch, book 3. Follow the continuing, passionate and heartfelt romance between Dr. Ashton “Snow” Frost and Jude Torres as they merge their lives together as a couple.

END_OF_DOCUMENT_TOKEN_TO_BE_REPLACED

This collection is more than 30,000 words long and contains stories such as:

***Note: These short stories take place after Shiver (Unbreakable Bonds #1) and should be read after the first book.***
END_OF_DOCUMENT_TOKEN_TO_BE_REPLACED

Blurb: Ian Pierce is the chef and part owner of the hottest restaurant in Cincinnati, his chosen family is full of happy relationships, and the scruffy, snarky cop who has been haunting his dreams is one step closer to being in his bed. But everything comes crashing down when the past he narrowly escaped nine years ago comes to a deadly head.

Hollis Banner was enamored of Ian at first sight. He’s kept his distance, knowing the gorgeous, self-confident man is out of his league. Yet there’s no standing aside when Boris Jagger escapes a raid. Jagger’s world has been nearly destroyed and this time, the crime boss is coming after Ian and his friends personally.

Hollis will do whatever it takes to keep Ian safe as they escape to a safe house with a couple of Ian’s overprotective friends. And Ian finds himself in a race to unlock painful memories—memories containing information that could take down the very last of Jagger’s illegal operations forever.
END_OF_DOCUMENT_TOKEN_TO_BE_REPLACED

Caught in a dangerous game of fire and bullets, neither expects the inferno of emotion that ignites between them. One Rowe isn’t prepared to accept. One that could break Noah
END_OF_DOCUMENT_TOKEN_TO_BE_REPLACED 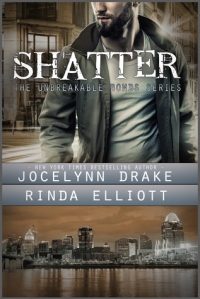 Blurb: Maverick trauma surgeon Ashton “Snow” Frost keeps the world at a distance, relying only on his three closest friends to keep him connected. But when a ghost from their past returns to Cincinnati, Snow stands to lose everyone he loves. Framed for murder and reeling from attacks on his friends, Snow is pushed to his breaking point.

Jude Torres won’t let the doc shatter. The paramedic has been attracted to the doctor since he first laid eyes on him at the hospital, even if the arrogant, solitary man doesn’t fit into any of his plans. One hot, reckless kiss shows that Snow isn’t who he appears to be. And one night together will never be enough. Jude will fight for the doc.